Skip to navigation Skip to content Skip to Footer

Why won’t my hoverboard turn on?

How to fix your hoverboard when it won’t turn on

Your hoverboard is all charged up and ready to go but when you turn it on, either it turns on and then shows a low battery after only a couple of minutes of riding it, or even worse, it doesn’t turn on at all. Here are a few things you can try in your hoverboard repair. 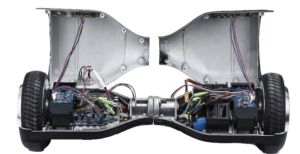 We have a HUGE selection of hoverboard repair parts. Everything from motherboards, to batteries, to wheels, tires and tubes!

But we have also seen another situation that can act the same way. Sometimes the charge port on the hoverboard has a locator tab that’s not big enough and then you can plug the charger into your hoverboard and have it so that it’s turned the wrong way. Even though it’s plugged in it’s not charging. To check this unplug the charger and have a look inside the charge port. There should be 3 pins and on the plastic plug you should be able to see the locator tab. Now look for the slot on the charger cord and line it up so that it will match up to the tab.

Plug it in and see what happens. If the light turns red and stays red that was probably all that the problem was. The tab inside the charge port is supposed to prevent you from plugging it in the wrong way but the charger is made by one company and the charge port is made by another company and sometimes things don’t go exactly as planned. The good news is that plugging your charger in wrong won’t hurt your hoverboard or cause any damage or danger. The charge port has three terminals but there are only wires connected to two of them so even if it’s turned the wrong way it won’t cause any damage. Just make sure that you have it plugged in the right way and this hoverboard repair tip should solve the problem.

If the charger isn’t the problem the you probably have a fault inside the hoverboard. You can easily get access to the battery by removing the bottom cover from your hoverboard. There are about 7 to 9 screws (depending on hoverboard model) on each side of the case that you can take out. Then locate the battery. It is usually in a blue plastic cover and is the largest part inside of the case so it should be easy to find.

It will have a two pin connector on it and you need to unplug the connector and check the voltage using a voltmeter. A fully charged battery will have between 36 volts and 42 volts. If the voltage is less than this and you have confirmed that the charger is working properly then it sounds like you need a new battery.

Have a look at the wiring inside your hoverboard and pay attention to the charge port wiring and where it plugs into the motherboard. Make sure it is plugged in properly. It’s also a good idea to unplug it and plug it back in and see if your hoverboard will charge. If this is OK then there is only one more thing to check before replacing the motherboard.

We have a HUGE selection of hoverboard repair parts. Everything from motherboards, to batteries, to wheels, tires and tubes!

If you purchased a Hoverboard or companion product though us (on www.brentscoolpicks.ca) we would appreciate you leaving a review on this website. Thx, and ride safely

I am a small business owner for over 25 years and believe that the best customer service possible is the key to a successful business.

5 thoughts on “Hoverboard Repair. What to do when your hoverboard won’t turn on.”

Give Us A Call